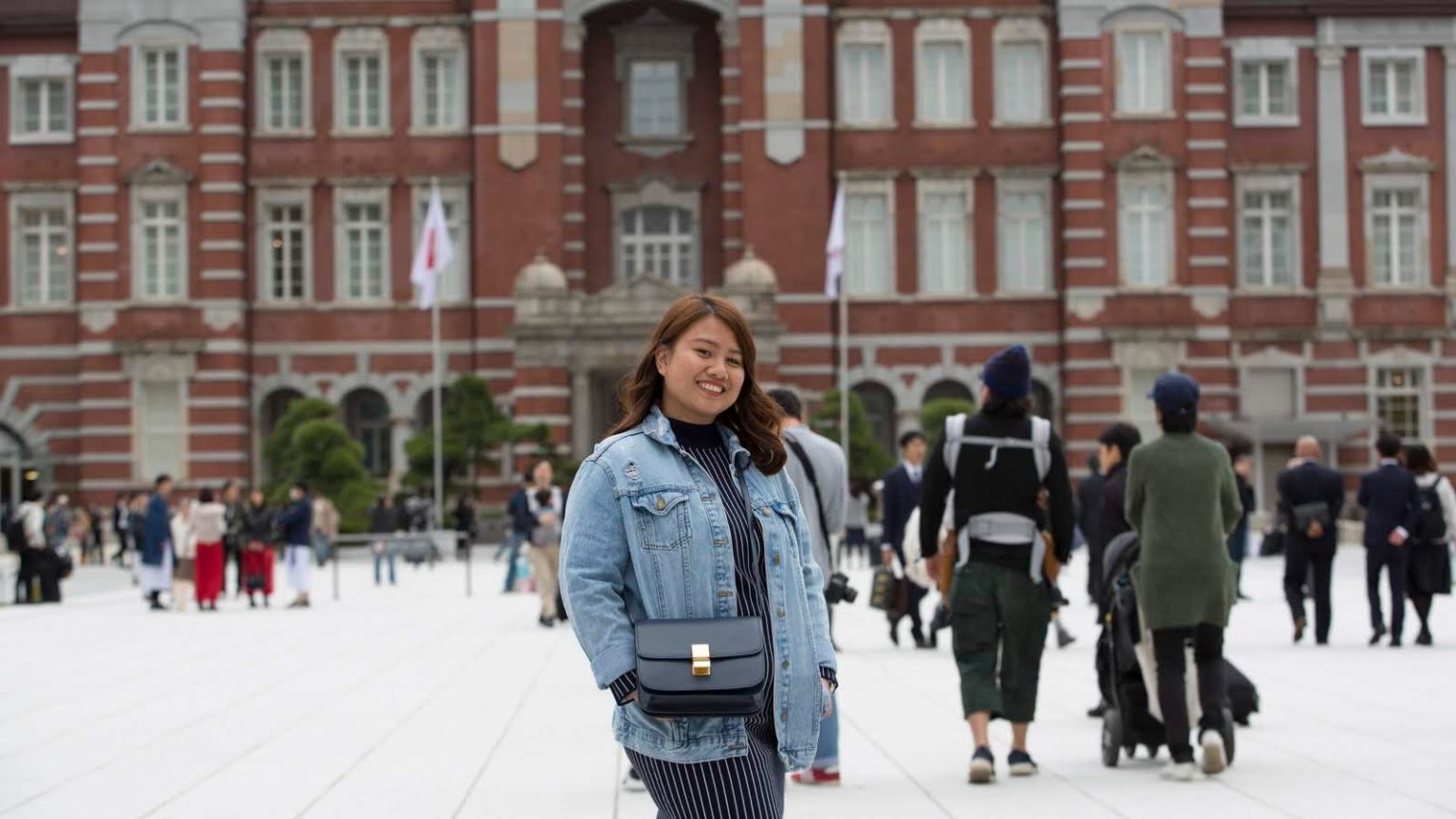 The following student entry has been translated from Tagalog to English.

Hello! My name is Rasien; I’m 27 years old. I graduated from University of Santo Tomas College of Tourism and Hospitality Management, taking up B.S. Hotel & Restaurant Management. A year after graduating, I worked with PAL from 2016-2019 as a Staff Assistant then was promoted to Manuals and Documentation Specialist. I didn’t have any other job experience outside of that, but in 2020, I started my own small business.

After graduating college around 2015, I looked up how to study abroad because I’ve always wanted to do Culinary studies. I found agencies that offer the US J1 programs & Canada student pathways, but at that time, my family [could not] afford to do those programs since it was out of our budget, so I said to myself, Maybe this journey isn’t meant for me. Thankfully, I found a stable job in PAL, and that gave me the opportunity to travel and experience other cultures, especially in the US & Canada. At least, I can visit those countries.

In 2019, another chance of doing the US J1 program came, and I took it. That journey was rough. It took me three hotel interviews just to be accepted. Then the hotel that accepted me all of a sudden terminated my internship. It got hard because we already spent a large amount of money and then we waited if there would be a new hotel that would hire. Thank God that there was, and I was accepted into a different hotel.

I was supposed to have my US J1 Visa interview on March 22, 2020… but a week before that the  COVID-19 lockdown was announced. I was still thinking positive because I thought it was just a precaution and this situation wouldn’t last too long. Not long after, the situation got worse and the agency shut down without any updates or forewarning.

I was lost. I was depressed. I had no idea what to do because that was my only plan. I resigned from PAL because of that J1 opportunity. I was frustrated because I felt that I disappointed my family and myself too. My family spent all that money for nothing. But I just prayed to God, asking him not to leave me alone. I also knew that there was a bigger future ahead and this is just a part of His big plan. So I started my small business called Sweet Surprise Bake House.

I started baking with my friends during lockdown because help and deliveries became more frequent. When they tried it, they told me that I should try selling it; so I did. Now, I also sell coffee buns and minimalist cakes. Even if it’s basic knowledge from school, I never stopped believing in myself.  Everything I needed for a recipe was self-taught and from what I saw on Youtube. The results weren’t bad! Just practice and believe in yourself.

I took a vacation to the US because the [Covid] situation in The Philippines became more toxic. Practically every country in 2021 was opening up and easing their restrictions, but the Philippines was still the same. I took the chance to wait it out in a different country and it was better for my mental health in the long run.

While being there, I took that chance to heal and to really think about my future. I also took inspiration from other bakeries and coffee shops. Then my [aunt’s] friend mentioned the student pathway (again) in Canada. I didn’t think about it again after the J1 incident because I was worried about failing again. My aunt and uncle convinced me to try DIY. I also saw some of my college friends doing the student pathway so I asked around how to do DIY because I feel some kind of trauma from agencies. What if I lose more money? Then a friend in Canada invited me to join various Facebook Canada DIY groups. I read a lot and did a lot of research before I started.

I talked to my family and told them that I was going to do it on my own this time. They could help, but I was going to see this through to the end. I wanted to be completely involved with all the steps. We didn’t consider having an agency anymore because it was DIY. Hanna sent me the DLI, and from there, I started my journey. I did a lot of research per province and school, and I finally chose Algonquin College in Ottawa.

I looked up Ottawa and I read that this is one of the most popular cities to consider if you’re about to move to Canada. One of the articles I read said that new immigrants choose Ottawa because of its diversity. Then I chose Algonquin because of my research. Algonquin offers areas of studies that answer to the needs of Canada’s current employment market. They were also offering two of the courses that I wanted to take.

I decided to take up Baking and Pastry Arts Management since I already started my business. I could learn all the management skills that I have yet to possess, enhance my baking abilities, and learn a lot more about the culinary industry. It’s also a good thing that the school didn’t need IELTS, that health insurance is included already in our tuition fee, and that they offer free arrival arrangements. So that was three less problems for me. The course also offers field placement work so that I would have firsthand experience.

Since everything was online in 2021, I started my application while still in the States. I did what I could from there. All the documents, especially ones that were from my previous school, I had sent them over at our house in the Philippines. I also made the appointment for my Upfront Medical because I heard it gets fully booked and it’s so hard to get an appointment with them. I went back home in December 2021, and then after my quarantine, I didn’t waste any more time. I continued planning and getting every document I needed. I was so determined to get this application approved on time. I did a regular stream and based on the posts, it could take one to three months to get approved. But I prayed that I would be approved easily and have enough time to prepare additional requirements before leaving. I lodged my application on January 3, 2022.

While waiting for my approval, I learned to surrender everything to the universe and to the Lord. I believed that He and the universe put me in this path because this is for me, and that I will not fail this time… and I didn’t. I got my approval on February 7, 2022. It was the longest 35 days of my life. The moment I read “Your application was approved,” I cried so hard. I cried because studying culinary has always been a dream for me. Now I am about to embark on this journey.

Finally, I will be fulfilling the lifelong goal, path, and career that I’ve always wanted. It felt so surreal. It was so much more meaningful because I was in the process of everything, with my family never losing their hope for me, and always supporting me. It took me a day, maybe a week even to tell myself Wow, you did it. This is it. This is the plot twist of your life. I didn’t want to sleep because if this was a dream, I didn’t want to wake up. Until now, I still cry a little when I think about what it took just to get here. I know it’s still a long way, but at least I’m here already, finally fulfilling my dream.

Getting my permit approval was just the first step. I am taking it day by day. Next is looking for a place for rent. I’m thankful for Facebook groups because through them, I’ve found places to rent and many who are willing to help me look. I’ve been having virtual viewings since I’m in the Philippines. I plan to go to Canada by the end of April because school starts on May 9. I’ll have enough time to settle down, arrange everything I need just before I go to school. As much as possible, I stay away from news about Covid, because sometimes, it’s too much for me. I don’t want any negative energy to latch onto me. But since I am travelling and I’m going out of the country, and entering a new one very soon, I try to just search on how travel restrictions have been between Canada and the Philippines. I always check if there are any new requirements, so I can add it up on my pre-arrival/pre-departure list.

For anyone who is thinking of studying in Canada, I say go for it. As long as you have the drive and the passion for what you are doing, do it. Just make sure to do a lot of research, and make sure you’re not doing it just because everyone else is. Be sure of yourself because this is your future. Studying in Canada is such a big step, but I’m very sure that it will be worth it. Looking back, if I gave up, I would have never ended up where I am right now. So don’t give up, and always believe that something good is coming for you. And whatever is meant for you shall never pass.

I’m very thankful to Ms. Ann Garcia for reaching out to me. After she introduced herself and where she works, I’ve read some inspiring stories in the magazine about other international students in Canada too. I think it’s a great way to reach out to every person who’s struggling and needs some encouragement for whatever they are experiencing in life, wherever they’re at with their application right now. It’s also a good thing that they have tips for living and working in Canada. Filipinos really help each other out. I hope you never stop reaching out to us and continue to give us inspiration.